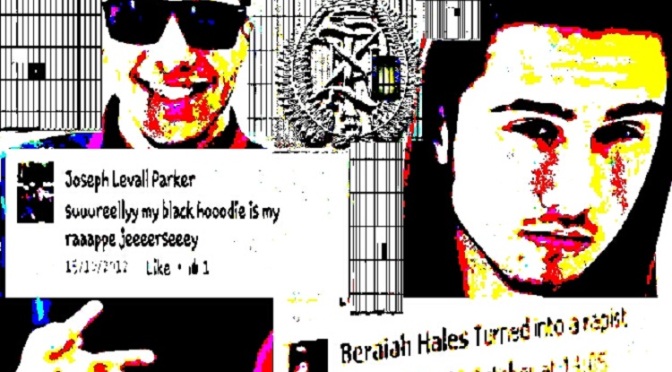 Yet again the corporate media is traumatising the victims of sexual abuse and sexual assault in New Zealand.

Their response to the now infamous serial-rape scandal known as #Roastbusters is almost as pitiful as that of the NZ Police, and equally as culpable for perpetuating rape culture.

We had thought the industry which routinely waters down the atrocity by referring to the pack rape of minor children as “group sex”, could not sink any lower. Yet at approximately 8:57am this morning (NZDT), one of the most credentialled journalists in the Kiwi media sphere, Sean Plunket, insulted victims all over New Zealand by noting the discontinuation of the Police’s botched investigation into the #Roastbusters scandal and asking the alleged serial rapists involved to “call in and defend yourselves”.

How easily it is forgotten that thousands of New Zealanders marched against rape culture after the scandal emerged. At around 0:20 seconds into the video at the top of this Stuff.co.nz article, a protester says precisely what needs to happen:

“So we’re basically here to get our point across – that it’s not okay what’s been going on with the Roastbusters and that they need to prosecute – and that laws aren’t strong enough.”
– Andrea Creighton, Wellington Sexual Abuse Foundation

Yet there have been no prosecutions, no law changes, and apparently Sean Plunket never got the protester’s memo. Fresh on the back of calling a woman who disclosed her experiences of inter-generational sexual abuse “a moron” and hanging up on her, live on air, he then used his Dominion Post column inches to pen his Roastbusters swan song – a piece clearly intended to exonerate him yet which only reiterates his ignorance of the topic.

For in Sean’s estimation, steeped in the privilege of the non-survivor, the steps we need to take to end the endemic rape crisis in New Zealand and it’s abysmal sub-5% conviction rate are:

“First – we need to collectively say ‘This is not OK’…
Second, men need to take ownership of the problem…
Third: we need to be realistic about the environment kids are growing up in”
– Sean Plunket in The Dominion Post

The fact that these pronouncements came on the heels of his collecting a salary while insulting rape victims on air, is brushed over smoothly with only a slight reference to his faux pas –

“Lest I be accused of dwelling in a glass house, we also have a media which in some instances has not been above making subtle criticism of the victims of this abuse and seeking to somehow normalise behaviours which by any civilised standards are abhorrent.”

Calling a woman confiding her rape ordeal to you, live in a public forum, a “moron” and preventing her from completing her testimony by cutting her off, is not “subtle criticism”.

Nor is the media’s obsession with referring to 18-23 year old males’ serial pack rape of minor children aged 12-15 as “group sex”. There is absolutely nothing subtle about the inherent bias that is constantly on display in our media.

For just as with Sean’s stated solutions – they ignore the calls and pleas from victims and victims rights advocates for the acknowledgment of the REAL problem: rapists do not suffer the consequences of their rapes, victims do.

As proven more starkly than ever before by the Roastbusters remaining free to this day – Kiwi rapists are not being arrested, prosecuted and convicted, unless they are Maori, from Northland, and somehow connected to Hone Harawira.

If they meet that criteria, there is ostensibly a massive increase in the rate of arrest.

Has our country really sunk so low, that alleged rapists are only pursued if they have connections to political opponents of the ruling government? That is of course, the government who has consistently cut funding to support services for rape victims, leading to several organisational closures.

Can it really be coincidental that Northland’s alleged rapists get such high-profile attention as to be packaged into “exclusive” news stories while the self-named ‘Roastbusters’ enjoy their freedom?

Why are our police forces so inherently impotent in holding to justice, a handful of mostly middle-class white boys from Avondale?

Why are they unable to arrest them for their boasting of their pack rapes, let alone the acts themselves? Surely Judith Collins’ cyber-bullying legislation would be sufficient?

Or is it because the perpetrators include, as this NZ Herald article states, the son of a police officer and a Hollywood actor? Is that why the NZ Police and the thousands marching in streets throughout the country, are unable to bring justice to bear against them?

Surely these are the questions that Sean Plunket,  with his massive media platforms, should be asking, if he could get his Roastbusters priorities straight.

His call to conversation, in the wake of nationwide uproar, is disingenuous. Men were already speaking out on this topic, just as they were marching alongside women in the protest actions, as this next comment clearly shows. 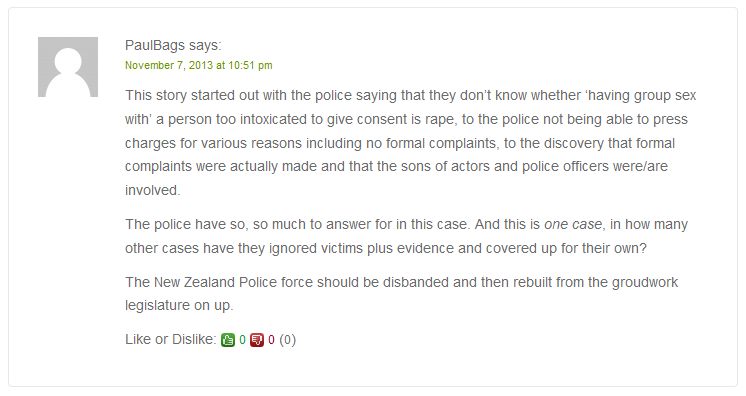 Historically,  men taking “ownership” of rape inquiries may be a factor in the abysmal conviction statistics. There is no doubt that it is predominantly males who have been making the executive decisions on which cases will or will not be investigated and allowed to proceed further, to prosecution.

What justice requires is so obvious: for the self-admitted Roastbusters rapists to be arrested, for them to be convicted and for them to be jailed for longer sentences than mere copyright infringers face.

Instead – we have one of the most famous talkback hosts in New Zealand using his position to silence and defame a sexual abuse victim, and now inviting rapists on air to self-justify their crimes ad nauseum – so Plunket can pat himself on the back for the “exclusive”.

Even on his third count Plunket was wrong – we don’t need to look at the environment our kids are in, we need to change it. Passively accepting the status quo means conditioning children to live in a society whose media rubber-stamp and/or enable our government and police force to allow serial rapists to roam free.

Just for one moment – be one of those girls. Imagine being raped. Imagine being mocked and taunted in public by your rapists. Imagine going to the police and having them pull out a video camera and filming you disclosing your experiences. Imagine the police doing nothing, or charging them with some misdemeanour then closing the case.

Imagine your mother turning on the radio on the way to school, and listening to Sean Plunket inviting your rapists on air to defend themselves.

The voices of sanity get less traction & a smaller platform…

…but they exist regardless. Much good writing has resulted from the Roastbusters scandal. A collection of some of those links is below. Please read and share them, for it is these independent voices, and not the corporate stooges, who deserve to pierce the veil and be amplified to the New Zealand public.

While victims face constant triggers and are re-traumatised by the callous arrogance and self-entitlement of mainstream media and the ignorance they so often trade in, it can be extremely refreshing to read through the below links and understand that so many really do care and do understand, but they just don’t have access to vast platforms, as do many of the rape apologists.

“Roastbusters – one year on (almost)” – OnTheLeft

SlutWalk Aotearoa recommends this podcast about the Roastbusters scandal.

And this – the most harrowing of all – the raw testimony of a victim, and a personal challenge to Sean Plunket  – Sean Plunket talks about those at the bottom of the NZ neo-liberal hell-hole by activist J.R. Murphy.

Even in the corporate world, where empathy is far harder to find and everything comes down to the almighty dollar (particularly, the avoidance of spending any while hoarding as many as possible), Roastbusters was a big deal.

According to this article “Roastbusters tops list of epic PR fails“, which usually means two things –  it cost someone a lot of time and therefore a lot of money, and subsequently, heads will roll.

UPDATE: A Huffington Post blogger sent us this very good article, however it makes reference to there being a lack of evidence (as per the police PR people’s butt-covering statement to the press). Would just like to clear this up, with a screenshot of one of the many admissions to their rapes that the perpetrators made in social media. 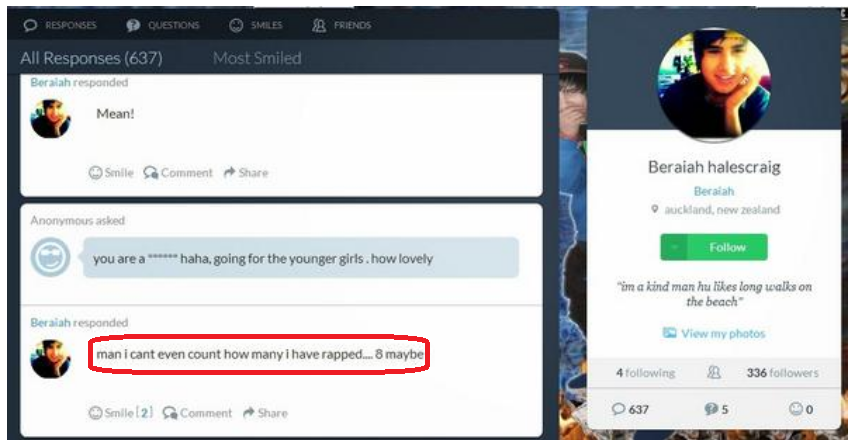 In case you can’t see that clearly, Beraiah Hales says to the person who has just pointed that he goes after “the younger girls” –

“Man, I can’t even count how many I have raped(sic)… 8 maybe”
– Beraiah Hales, bragging about his rapes on social media

This fantastic article by Auckland University researchers describes the international relevance of the Roastbusters scandal – noting the parallel to similar examples on the world stage, like #Steubenville – and includes a more in-depth study of the evidence at hand, noting many more examples of the Roastbusters rapists incriminating themselves online through social media.