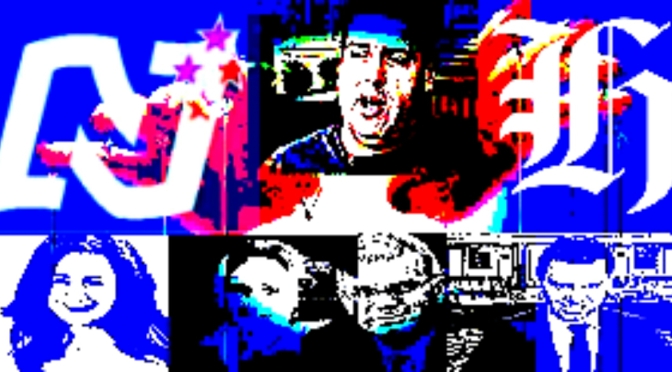 Who could imagine we would witness #DirtyPolitics right-wing blogger Cameron Slater openly blackmailing NZ Herald journalists and ostensibly getting away with it? While complaining that he is the victim of “leaks”, it is clear that “leaks” are exactly what WhaleOil and his accomplices trade in.

That NZ Herald editors have allowed a situation to continue where their lack of action against reporters leaking information to attack bloggers results in those same bloggers now publicly turning their dirty tactics against those journalists, beggars belief.

The below article is by much-loved Kiwi blogger Giovanni Tiso (@gtiso on Twitter). Giovanni is a writer and translator based in Wellington. He blogs at Bat Bean Beam and this must-read article has been reposted here with permission.

Always there is the temptation to take sides, especially if it’s the side that Cameron Slater isn’t on. But what we have come to know as dirty politics is a tangle. There are no ‘sides’. Just threads. Pull on the wrong one, and the knot only gets tighter.

hello mate,
feel free to use any of this stuff…best to refer to as something from the tipline

Cameron Slater posted this last week on Whaleoil, a strategic piece of leaking from his own communications. The redaction is his. The intent, less than noble: to remind John Armstrong – author of the latest opinion piece on dirty politics – that at any moment he could release the rest of the email, or other emails like it, and cause embarrassment to a colleague and to his newspaper. ‘Stay away,’ he warns him. And then, sotto voce, to the rest of us: I’m not the only bad guy, you see, and besides everyone is a bad guy. We are all dirty. (These aren’t quite his words.)

The redacted email is yet another thread for us to pull. It’s always tempting when you come across a new one.

The week after Dirty Politics came out, I wrote of the struggle that might ensue within media organizations and of our likely role as spectators unable to influence its immediate outcome. I also suggested that if it was ever going to become a question of the media versus the public, the public would lose. It hasn’t quite come to that yet, but there are signs of entrenching within the profession. Complaints that the critics are becoming too loud and the criticisms too harsh, especially on social media, with no apparent awareness that mounting frustration might be the source of the outbursts and attacks. And so it was that Patrick Gower – who some weeks ago lamented how Twitter had stopped being fun – finally lost his patience, along with what was left of his self-awareness.

I understand wishing to be left alone, sometimes, and I’m sure that not all of Gower’s botherers have issues of public interest foremost in their minds. But there are too many questions there aren’t being answered, too much carrying on as if nothing had happened, for journalists who built their careers on playing the game the hard way to cry ‘leave me alone’.

Then there are the ex-journalists. Like Colin Espiner, former political editor for The Press, long-time columnist at the Sunday Star Times, now external relations manager for SkyCity; or Bill Ralston, former head of news at TVNZ, still weekly columnist at The Listener, still regular commentator on radio and television, celebrity speaker and principal – along with the missus – of a communication company specialising in ‘media training, political strategies and crisis management’. Upon learning that an investigative journalist had his house raided by the police and personal as well as work documents seized, what these stalwarts of the profession chose to be angered by was the fact ordinary citizens were paying money into his legal fund.

Jealousy and resentment are perplexing feelings to harbour towards somebody like Nicky Hager, except perhaps by the people mentioned in his books. And sure, these two are no longer practising journalists, but I would put forward that the former political editor of a major newspaper and the former head of news of our state broadcaster are still representative of the culture, most especially at the managerial level.

However the greater issue is the sheer weight of what hasn’t changed: on the wake of a scandal which engulfed the media, there have been no resignations among executives or reporters, nor to my knowledge has any print, radio or television editor signalled a change in the way things will be done and who will be asked for comment on politics and policy.

In no particular order: Rachel Glucina is still employed by the newspaper she was using as a mouthpiece for the Minister of Justice. Cathy Odgers was approached by the New Zealand Herald to comment on the political campaign, and the column might well have gone ahead if she hadn’t pulled out herself. Matthew Hooton admitted to Kathryn Ryan his role in the ‘chop chop for Nicky’ affair, and has kept his half-dozen jobs as a political commentator and columnist, including on the public airwaves. Jim Mora continues to invite representatives of a Tory front organisation and the likes of Stephen Franks – whose legal firm made use of Whaleoil – on his popular show at Radio New Zealand. Cameron Slater remains a commentator for Newstalk ZB (which led Wendyl Nissen to resign her job at the station), as is Jordan Williams (which led Helen Kelly to resign), as is David Farrar.

They’re all still there.

So maybe reporters working for those same organisations – and the list is hardly exhaustive – may wish to reflect on why their calls for the resignation of politicians or appointees are not always as forceful and effective as they seem to think they should be.

There has been some excellent reporting done on dirty politics, but it counts for little so long as some of the main players in the story – all of whom have been variously shown to be in the business of manipulating as opposed to informing the public – are going to continue to occupy their privileged, unchallenged platforms. It does not serve either balance or plurality for us to continue to hear from them.

And so, if I decided to pull on the thread and follow up on the redacted email, it was not to do Cameron Slater’s bidding in his campaign to get the New Zealand Herald to shut up about dirty politics, but because I don’t think we’re asking enough questions about dirty politics. The Herald, remember, is still not disclosing the documents that formed the basis of the Donghua Liu reports filed by Jared Savage in June of this year. Savage, in turn, has admitted to passing information on to Cameron Slater in the Feeley affair, three years earlier. The link isn’t casual, and the possibility that the Liu stories were part of an orchestrated attack on Labour at the outset of the election campaign is very concrete. So where’s the reporting on this relationship? Who is questioning the reporters?

(And no, in case you’re wondering, bloggers don’t count. Not if their lines of enquiry aren’t followed up on.)

To be fair, Morning Report did interview Herald editor-in-chief Tim Murphy on Donghua Liu. But when the Feeley email was released to the press, raising significant concerns about the conduct not just of a cabinet minister but also of two senior reporters, the latter got to respond on the Herald’s website and that was that. So far as I can tell, no further explanation was sought or given.

In his response, Savage explained that he forwarded some emails on to Slater as part of an information sharing or ‘horse trading’ arrangement.

This struck me as chilling at the time, but also indicative of a surprisingly common attitude from within the industry, a perplexing combination of hard-nosed pragmatism (you should know how things work, son) and bewilderment at how information could get into the wrong hands once it’s passed through the hands of a journalist. Savage says it well: you people are naïve; I was naïve. This naivety serves a double function: to explain and to absolve.

I asked Russell Brown, who knows a lot more than I do about these things, about the extent in which sharing information in this way might be standard practice. He replied:

You could say that there’s an element of exchange in many interactions between journalists and sources, but I don’t think it’s particularly common for journalists to trade information with their sources in that way. But Slater was a strange fish — he was both wholesaling and retailing scuttlebutt on behalf of others. Wholesaling it to journalists, retailing it in his blog.

Inside of that relationship, the wholesaling and the retailing, a number of people had their lives dragged. And while Nicky Hager is constantly questioned about the ethics of his working with stolen correspondence, none of the reporters who have collaborated with Slater have had to defend the public interest value of their stories against the danger of exposing others to Whaleoil. Yet that is also where the naivety defence falls apart: for nobody can claim not to have known what that blog was about. There is no excuse.

I asked Jared Savage if he’s the author of the redacted email which may not even be real. He responded courteously that he would not comment pending Justice Chisolm’s inquiry. I asked David Fisher, who said that he wasn’t, and that he never traded information with Slater back when he had dealings with him. I asked Shayne Currie and Tim Murphy separately for comment. None has been forthcoming.

[Thank you for reading and sharing this important work. The amazing artwork at the header of this post was donated by Occupy Auckland media co-ordinator/livestreamer @Redstar309z]