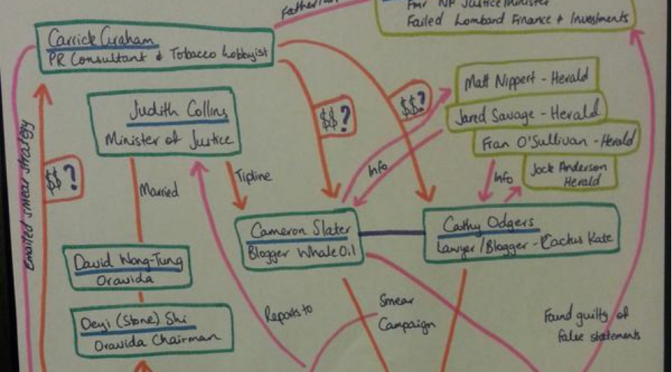 There are any number of issues it would be easy to write about as a result of the continuing fallout of my brother Nicky Hager’s book ‘Dirty Politics’: the extraordinary way the Prime Minister continues to tell his porkies (even when it’s obvious he’s lying); the seemingly total disconnect such acts have on the consciousness of the general public; the cynicism with which the government uses fear tactics to defend brown-nosing their war-mongering puppet masters in the US; their bullshit ‘investigations’ into abuse of power (setting up inquiries with such limited terms of reference they are guaranteed to be let off the hook); their disregard for the principles of democracy and freedom as they stomp all over them . . . and us.

But what continues to infuriate me, even more than the horrors of this elitist right-wing agenda (and, trust me, these horrors are HUGE and risk all our futures), is how the media has been so corrupted and divided that some of the influential individuals who work within it can no longer be viewed as practising with any kind of impartiality. Of course, I’m sure, if asked, all would say they do give a balanced view – proof, as if we needed more, of just how far their focus has been swayed.

What is truly disturbing about this is that there is no consideration given to the fact that: a) this woman has already been outed as actively manipulating news stories for her own and her party’s political advantage, b) there are an increasing number of right wing commentators being given air time or column length (and who are treated as bi-partisan when they are clearly not) and c) that Gower appears bored by the fact that news integrity might be being undermined, sweeping the foundations of our social democracy away with a cynical yawn.

What he’s saying is that no one cares – and that those who do, do not have a legitimate right to make comment or have any legitimacy regarding their concerns. It’s hard to process this. Gower, one would assume, is an intelligent man, working right there in the corridors of power. He presumably believes in the journalistic codes of fairness and balance (or, at least, I’m sure if he was asked he would assert this). Yet, rather than see that those tweeting their concern about this latest undermining of open and impartial media are seriously concerned about the degradation of our democracy and the underhand behaviour of our government politicians, he belittles it and looks away.

Of course, Gower is not the only one. And it doesn’t take much to see why he and others who started their careers as well-meaning journalists are sheltering behind snide remarks and lazy reporting: if we look back over the most recent past term of this government, we can see that those who have tried to question the government and its policies have been disposed of, one by one. TVNZ 7’s excellent news and documentaries were the first to go, and now we are seeing the devolution of Maori TV’s fantastic current affairs broadcasting. This is happening at a time when toxic right-wing luvvie-boys have been put into positions of immense power by broadcasters (yes, I’m talking Hosking and Henry – equally vile, vitriolic little men, who are more interested in sneering at those who hold genuine concerns for the state of our country, and propping up their own ‘celebrity’ status, than actually delivering unadulterated news.) They are our pseudo-Fox News presenters, self-absorbed, with little genuine concern for their fellow NZers or the ethical health of our current politicians, using the poor young women who have been partnered with them as mindless Barbie dolls who are presumably there in order to reflect their ‘glory’. It raises bile just to watch.

Any decent news commentary has been relegated to times when most ordinary Kiwis are otherwise engaged. The Saturday morning timing of news and current affairs is a particularly cynical piece of programming – a time when many are taking their kids to sport (or other extra-curricular activities) or partaking in it themselves. Ditto Sunday mornings – when even the most square-eyed among us tend to give TV a miss.

If we had unbiased newspapers this mightn’t be such a problem – but only the very uninformed could now not know that the majority of our daily papers are owned by huge corporations whose bosses have very clear political preferences and aren’t afraid to show it. And it’s hardly a surprise that they all lean heavily towards the Right. They’re corporations, for goodness sake! Their priority is to make money and to prop up the systems that most benefit the rich.

Even Radio NZ, our national broadcaster, does not seem to have an edge on balance. Jim Mora’s ‘Panel’ continues to use commentators who have been outed as mouthpieces for the Right – and their questioning of Government ministers is erratic at best.

The attitude taken by Gower and his colleagues, that those of us concerned by media bias and corrupt government are flogging a dead horse – or, worse, are delusional – is the very trap the Government’s PR men have set for them to walk into. It’s the same strategy that sees John Key repeat their dog-whistle lines, such as ‘most Nu Zelanda’s don’t care’, and comparing every bloody thing to a game of rugby or dragging up the old ‘I was born in a state house’ red-herring – side-tracking away from the issues and pretending to be ‘one of the boys’ when, in reality, these guys are squirreling away their fortunes while they steal ours. That the very people we rely on to tell us what is really going on have fallen as heavily for this PR bullshit as the unquestioning viewing public is disturbing indeed.

Don’t just take it from me: here’s John Pilger on exactly the same issue: http://johnpilger.com/articles/war-by-media-and-the-triumph-of-propaganda

Now, I realise that Gower and co feel like they’re being picked on – in fact, in his case, he has told us all to leave him alone (I guess this makes life easier for him – less to ruffle his conscience) but I would like to think that those journalists who actually entered the profession with some desire to tell the truth of what is happening would find some balls and stand up to the corporate imperative to spread the Government’s PR spin. They’d sure as hell get my respect for doing some real investigative digging – and the respect of the thousands of other decent, ethical Kiwis who want to see our democracy strengthened and our rights returned.

Meanwhile, we’re left feeling like Chicken Licken, trying to warn that the sky is falling down while everyone else is so busy trying to feather their own nests that they don’t give a damn.

And if our prominent journalists do start to give damn and find the balls for real investigative digging? Then maybe they’d start asking some of the hard questions – and not stop until we get right down to the real answers. Questions such as:

* When will the questions raised in Dirty Politics be addressed? Properly. By a really impartial, well respected, ethical, non-partisan New Zealander? With no limiting parameters or strings attached?

* Why was Nicky singled out by the Police when there are very real questions about tampering with evidence, political interference, lying and corruption amongst the Government ranks? Where are the Police investigations in to this?

* Just how much back-room influence was wielded around National Party candidate selection?

* What is John Key’s relationship with the USA? What has he promised on our behalf?

* When will someone held responsible for the manipulation of SIS information? And if not, why not?

* Why can’t we have an independent Commission of Inquiry? If Mr Key is so sure that he hasn’t done anything wrong then he should have nothing to fear.

* Just who is controlling the narrative in our media outlets? Why are Government Ministers and apologists given so much page space and airtime?

And then, if the media really did have our best interest at heart, they’d start to put the pressure on over climate change, the very real dangers of the TPP, our involvement in Iraq etc etc… the kinds of issues that will affect us all for generations to come.

Come on guys. If you don’t like the criticism then smarten up your acts. Or if you are being put under undue pressure to leave such investigations alone, come out and say it! We will support you all the way.

This post was composed by invitation and also appears on Mandy Hager’s personal blog under the headline “Today’s burning issue – and why I refuse to shut up“.