The ingredients: New Zealand’s furthest ‘Left’ radio station, commanding one of the largest listening audiences in the country. A preeminent host; Lynn Freeman, 30-year veteran at the station, host of ‘Standing Room Only’ and Kathryn Ryan‘s “fill-in” for ‘Nine to Noon’. Experienced. Tested. Confident. Julian Assange; the world’s most cutting edge, infamous and credentialed technologist, publisher and geopolitical commentator. Legend in his own time. A scholar who believes in radical transparency, acts accordingly and dares circulate such revolutionary thoughts that most of the world’s governments are baying (and more) for his blood.

Sounds like a media match made in heaven, right?

Unfortunately the end result was an all-too-familiar inquisitorial abomination that one would expect to come straight out of CNN or the BBC.

While maintaining a soft vocal tone, Freeman’s questions were indecipherable from the self-righteous acidity of dozens of other mainstream interviews of Assange – reading like a script manufactured by intelligence agencies for maximum smear effect.

If, as a listener, you wanted to hear about the numerous recent releases by Wikileaks (ie. relevant and timely content) you were profoundly disappointed.

While touted as an exclusive “New Zealand first” interview, the host didn’t manage to extract any exclusive content. So much so, that the marketing blurb for the interview reads:

Julian Assange, the founder of the international whistleblower-website Wikileaks, told Nine-to-Noon this morning that he does not know when he can leave the Ecuadorian Embassy without fearing arrest.

Hardly breaking news. Is that really the best they could get from 27-odd minutes of Assange’s time?

But to coax new revelations out of an interview subject you have to ask new questions. Which is precisely where it all fell over.

Here is an analysis of the proceedings:

The standard mode of operations/primary goal when establishment media interview Assange appears to be getting the words “sexual abuse allegations” into the first 20 seconds of the introduction, before he even has a chance to greet the audience. Freeman doesn’t disappoint, accomplishing exactly that.

By 1 minute and 20 seconds in, Assange is calling the introduction out for what it was.

Assange: Well, I thought I’d just recontextualise your introduction. I understand you’ve probably got it from some British newswires, but it is interesting to see the kind of propaganda that is put out by the U.K. – not surprising, unfortunately. I have political asylum in the Ecuadorian Embassy and in violation of international law the U.K. has surrounded this embassy for the last three years, at a cost that it admits is equal to 20 million New Zealand dollars. I have been detained in the U.K. without charge for five years. My political asylum in this embassy relates to a very large pending prosecution in the United States for espionage; it’s not in relation to Sweden. The U.K. also has additional cases as well. In relation to Sweden, there is no charges, it is a “preliminary investigation” and that matter, I have already been cleared in. I have already been found to have committed no crime.

Unfortunately, that contextualisation did not return the interviewer to the task at hand, which was supposedly to discuss the new Wikileaks book – The Wikileaks Files.

Instead, the first 3 minutes and 55 seconds of the interview is consumed entirely by discussion of the non-existent charges.

By 5 and a half minutes, the book still hasn’t been mentioned, and the interviewer begins invoking comments Edward Snowden has made about his own legal situation in order to measure Assange against her Snowden yardstick.

Assange deftly sidesteps the diversion, using the opportunity to draw the parallel between himself, Kim Dotcom and Snowden’s cases all being in Alexandria, Virginia, with the same prosecutor.

Now past 8 minutes, the interviewer asks several more questions about Snowden’s situation, completely ignoring that the topic of the discussion is  supposed to be the publication of The Wikileaks Files – which -still- hasn’t been mentioned. Nor have any of the other monumental and significant 2015 Wikileaks releases been mentioned by her, even in passing.

At 10 minutes and 15 seconds, nearly halfway into the interview, the first question about the book finally comes. Unfortunately, that mention is quickly followed up by what is possibly the most inane question of all time. Freeman asks:

Now you have commissioned people to contribute to the book The Wikileaks Files. Did you approach anybody who you know to be a critic of Wikileaks or have you only approached people who have supported Wikileaks in the past?

Um, exactly what author of any book in existence, hires someone to trash their book within its very pages? Who goes to their enemies and says “hey, I’m compiling a book, will you usurp some of its pages to put forth your completely contrary opinion?”

And that’s exactly what it would be – opinion – as opposed to professional and academic analysis, which is what the book actually contains, as Assange points out:

Freeman pushes it further, suggesting that allowing people to slam Wikileaks from within the pages would “present a range of views“; as if it would be reasonable for Wikileaks to be on ideological trial inside the covers of its own book.

That the interviewer hasn’t actually read the book becomes starkly apparent, with her all but admitting it by inference, when at 13 minutes into the interview she finally asks the first geographically relevant question –

Can I ask for a synopsis, or if indeed New Zealand does appear in that book?

Bearing in mind that this interview is sold as being a New Zealand first exclusive, would it really be too much to ask for the interviewer to have read the book on which the interview is to be based? Or to have scanned it for the content which is relevant to New Zealand? Or to at least have had an office junior or researcher do it for her?

Incredibly, that is the sole question asked about New Zealand in the entire interview.

To appear not to possess the vaguest notion of what relevant information the book contains is unforgivable.

At just over 18 minutes, the banal becomes the completely inane, as Freeman asks whether Wikileaks is still publishing or whether it has “done it’s dash“.

The gall of this: asked in the wake of TWENTY ONE Wikileaks releases in 2015, each of which was of massive, global significance.

These releases include (but are not limited to):

It is unclear what is worse – that Freeman appears to be completely oblivious to the existence of any of these releases or that she didn’t even visit the Wikileaks homepage and see what and when their most current releases were.

Subsequently, she fails to ask a single meaningful question about any of them.

By 19 minutes and 30 seconds, she is back on the topic of the non-existent “sexual assault charges” with Assange again correcting her, pointing out that there are no charges filed against him.

Circa 20 minutes, the interviewer is urging Assange to “walk out of there and face the music” as if him putting himself at the mercy of his persecutors by abandoning his asylum, sacrificing his freedom, surrendering his ability to continue publishing and committing political suicide would somehow be beneficial to humanity rather than demonstrably detrimental.

The interviewer tells Assange that to do so would be “the best option for you“, as if she was his legal counsel rather than a radio host that had failed to even read his book before interviewing him about it.

At this point, the interview becomes even more downright hawkish.

“You are not above the law” Freeman slings at Assange, which prompts him to calmly explain the history of the Espionage Act and its significance as a tool used to chill, limit and punish free speech.

The interview is brought to a close with the classic “are you a criminal or a hero?” – diametrically opposed suppositions – a tactic also used against Snowden and other controversial figures.

Assange rightly calls the dichotomy “unimportant” and discusses what is important to him – “[it is] important that you get things done in the time that you have… and that you have warm, loving relationships with the people who are around you.” 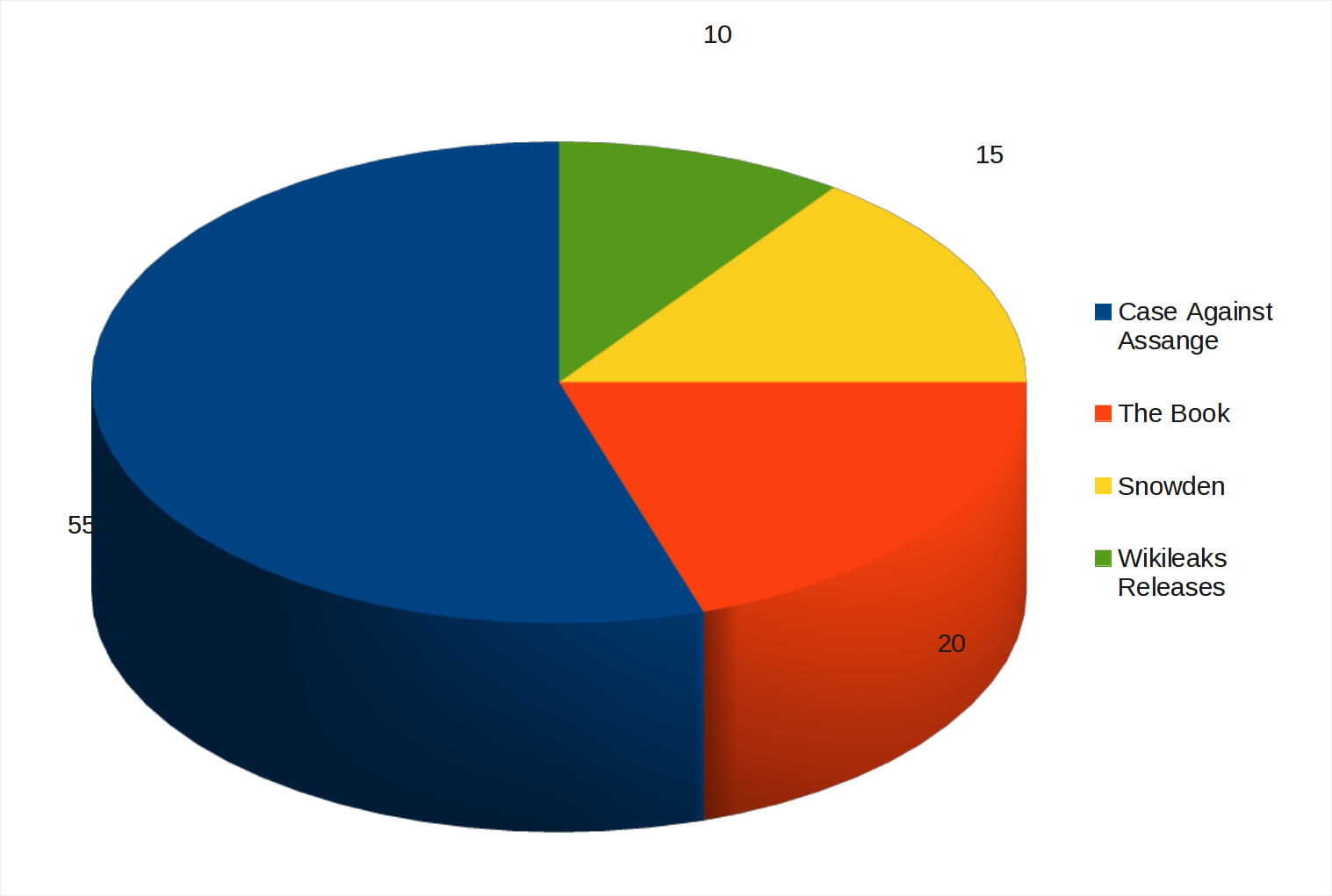 The above graph really speaks for itself. The question of why the interview is so skewed is answered by Julian himself, at the tail end of it.

By merely listening, you would never know that the sex scandal emerged in 2010 and that it is now 2015. The miles Assange’s detractors have squeezed out of it beggar belief.

Unfortunately this interview isn’t a one-off – it is in fact extremely formulaic and common. There are countless interviews just like it. Same talking points. Same topics and similar distribution of questions about each topic.

If you want to hear anything other than Julian being forced to endlessly defend himself you have to take refuge in You Tube videos of his event appearances, which are a completely different kettle of fish.

In those appearances, the interviewers are markedly less hostile and rather than be forced into a defensive position, Julian is able to speak freely and at length about the many topics in which he is extremely learned, discussing systemic issues like mass surveillance and technology; journalism, publishing and the media; the origin, structure and condition of the deep state; geopolitics and diplomacy, among others.

In the last week alone there has been at least three such events published in the public arena: Julian speaking at the Cambridge Union; at the Russia Today 10th Anniversary event; and an event in Berlin, Germany. None of which RadioNZ appear to be interviewing him about, which is a crying shame.

The above videos are truly brain food, providing viewers with a depth of understanding and pertinence of subject matter that most mainstream media interviews of Julian Assange do not.

(Full disclosure: I have never been employed by RadioNZ but did once inform them of my relocation to Berlin, Germany and that I was available to discuss local events. I am disclosing this for the purpose of absolute transparency. I do not consider it to present a conflict of interest as I have written for Public Address, who were also critiqued on this site. Whether an organisation has or has not engaged us in other work does not impact upon their inclusion or exclusion from The Spin Bin articles: editorial decisions are based solely on the merit of the points argued.)